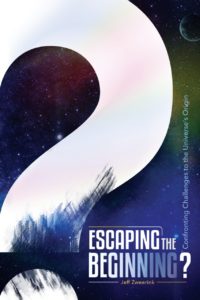 “Escape games” are a thing now. People gather their clever, non-claustrophobic friends, sign the proper releases, and pay money to be locked in a room together. A variety of cryptic clues are scattered about to help the willing captives break codes, solve puzzles, and successfully complete challenging tasks that will bring them step-by-step closer to freedom before the clock runs out. Time is of the essence.

In astrophysicist Jeff Zweerink’s new book, Escaping the Beginning?, we find that a number of physicists and cosmologists are feverishly working out theoretical puzzles and experimental challenges to escape the philosophically and theologically confining implications of a Big Bang singularity. Time, and its beginning in particular, is the essence of their dilemma.

Concisely stated, scientific consensus affirms that our universe is exquisitely fine-tuned for complex life in such a way that an external cause agent outside of its multi-dimensional boundaries seems to have been necessary for its initiation. As Zweerink’s old-earth-creationist colleague Hugh Ross has detailed in his fourth iteration of The Creator and the Cosmos (read review), this sounds a lot like the ex nihilo creation of all things as described in the Judeo-Christian scriptures. Many atheist and agnostic scientists find this alignment to be unsettling and unacceptable, yet they cannot make an adequately supported scientific case to the contrary that will stick. But they are trying.

Zweerink provides solid historical backstory on both past and current models of how our universe came to be the way it is. Key scientific discoveries have overturned past theories and bolstered confidence in new ones. Oscillating models and steady state models have fallen by the wayside for the most part in favor of an expanding universe with a Big Bang beginning, but many questions still remain.

For example, the probability of a single universe arising naturalistically with such optimal conditions for advanced life (or even its required chemistry) is so miniscule that atheists are pretty much obligated to invoke the presence of a multiverse where any and all realities occur. But does a multiverse actually subvert a beginning? If so, under what conditions, and how can those conditions be proven?

No less than Stephen Hawking and Lawrence Krauss “speculate that a quantum law of gravity fluctuates our universe into existence.” (p. 169) In The Grand Design, “Hawking seems to show how to get a self-contained description of the universe with no beginning in time. In contrast, Krauss seems confident about how his model gets the universe from nothing, as seen from the subtitle of his book, A Universe from Nothing: Why There Is Something Rather Than Nothing.” (p. 144)

Make no mistake, more than the scientific record is at stake.  Zweerink notes that “[p]art of Hawking’s motivation was trying to remove the need for God to ‘light the blue touch paper and set the universe growing.'” (p. 140)  And regarding the work of Lawrence Krauss, avowed atheist Richard Dawkins is quoted as saying, “If On the Origin of Species was biology’s deadliest blow to supernaturalism, we may come to see A Universe from Nothing as the equivalent from cosmology. The title means exactly what it says. And what it says is devastating.” (p. 127)

Since our universe started out infinitesimally small, it seems reasonable to assume that quantum effects might have greatly impacted its development early on. Zweerink concurs that “[o]ne problem plaguing all attempts to address the beginning of the universe is that the conditions near the big bang singularity (usually) demand both general relativity and quantum mechanics. However, scientists do not yet have a proper quantum theory of gravity, although many different approximations exist. In order to truly answer the question, ‘Did the universe begin to exist?’ in an absolute way, we need the proper quantum theory of gravity.” (p. 41) Significantly, he later adds that “[e]very time in the past where cosmologists have developed a model without a beginning, subsequent experimental and theoretical research eventually narrowed the field to models with a beginning.” (p. 170)

Zweerink also points out that, in their grand conjectures, physicists often ascribe God-like qualities to the laws of physics. Might such laws be eternal, or could they somehow bring themselves into operation? Once in operation, could they have the capacity to create conscious beings who can speculate about their significance on an existential level? Alternatively, like Thomas Nagel in Mind and Cosmos, should we assume that consciousness infuses the fundamental fabric of the universe and that the laws of physics are conscious as well? Can such a notion be supported by the evidence? In a very literal sense, it may be that time will tell.

Escaping the Beginning? may be one of the most important books in science apologetics to date for it addresses a radical change in the science-faith dialogue. Space-time theorems of the late twentieth century will no longer provide the winning “slam dunk” in debates. Asking the question, “Why is there something rather than nothing?” will no longer be adequate to convince in academic circles. There will be push-back, but the scientifically savvy believer can still be prepared, ready to offer hope beyond a void of nothingness or a theory of everything.

This book is written with clear and precise language, and its simple diagrams are instructive. Well-stated key points and thought-provoking discussion questions are included at the end of each chapter. Although an historical overview of the science is provided, some college-level physics is required to firmly grasp some of the technical detail inherent to the state of the debate. Unfortunately, this means that cutting-edge arguments will be increasingly less accessible to the science layperson; only those working within increasingly specialized disciplines may be able to discern the significance and validity of data at the leading edge of advancing scientific thought. It is important for scientists of faith, like Zweerink, to remain actively engaged in research and to have a voice—so that more of us can benefit from, and engage in, informed discussion regarding those matters that matter most.

Jeff Zweerink is author of Escaping the Beginning? and a Senior Research Scholar at Reasons to Believe. He is also a project scientist at UCLA working on GAPS, a balloon experiment seeking to detect dark matter. Dr. Zweerink is coauthor on more than 30 papers published in peer-reviewed journals, such as Astrophysical Journal, Astroparticle Physics, and Astrobiology, as well as numerous conference proceedings.