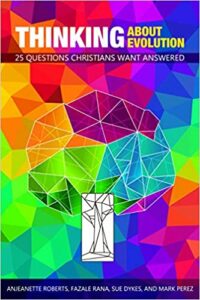 In the film Robin Hood: Prince of Thieves (1991), the villainous Sheriff of Nottingham dispatches henchmen to kill Lord Locksley based upon a contrived and false accusation. The Sheriff later wields the sword of the slain nobleman against the man’s own son, Robin Hood. When Robin first sees his opponent unsheathe the familiar blade, he defiantly states, “I shall never fear my father’s sword.”

By the time you finish this review, perhaps you will understand why the recently released Thinking About Evolution: 25 Questions Christians Want Answered (2020) reminds me of this cinematic moment.

This book is for those who are fearless. Whether you are an atheist, agnostic, theistic evolutionist, old-earth creationist, or young-earth creationist, Thinking About Evolution: 25 Questions Christians Want Answered will both inform and surprise you.

Wherever you may fall within this wide spectrum of viewpoints, everyone is aware that the subject of evolution has divided all the aforementioned camps from one another by varying degrees. Moreover, Darwinism has become centerpiece to the claim that the scientific endeavor is a purely secular one. From its original form, a neo-Darwinian theory of evolution (i.e., modern synthesis) eventually developed and was accepted with little serious scientific critique—until an increasing amount of dissenting data was accrued over several decades throughout various disciplines.

“In more recent decades, the challenge of incorporating several unanticipated discoveries and observations has evolutionary biologists debating whether continued revision of the modern synthesis is possible of if it needs to be scrapped and replaced with an extended evolutionary synthesis.” (p. 39)

Note that extended evolutionary synthesis is not just an extension of modern synthesis (as the name might imply) – rather, it is more aptly characterized as a revision. Likewise, the development of neutral theory has occurred “in response to genetic sequence analysis and computational modeling that challenged the adequacy of modern synthesis’ mechanisms.” (p. 40)

New versions of this old subject of debate are explored by four co-authors with impressive credentials. Anjeanette “AJ” Roberts holds a PhD in molecular and cell biology, conducted postdoctoral research at Yale, and served as a staff scientist at the National Institutes of Health. Fazale Rana holds a PhD in biochemistry and worked as a senior scientist in product development for Proctor & Gamble before joining the Reasons to Believe scholar team. Sue Dykes earned a PhD in paleoanthropology at the University of Witwatersrand, specializing in the classification of hominid teeth. Mark Perez holds both an MA in analytic philosophy and MPA with an emphasis on organizational development. In both government and private sectors, he has taught critical thinking and problem solving.

These scholars possess distinct yet complementary professional backgrounds that offer insight into the peer-reviewed research and beyond. Roberts provides an overview of evolutionary theory, clarifies confusing scientific terminology, helps the reader distinguish observations from inferences, and identifies types of reasoning that may be legitimately employed to make assertions about the past. In addition, she also explains the role of philosophy in science and why there are limits to what science can tell us. Her chapters regarding the inherent limits of natural selection and evolution’s “novelty problems” are masterfully presented.

Rana opens Darwin’s “black box” and describes how the complexity of biochemical systems required for life mitigate against purely naturalistic explanations. As an anthropologist, Dykes offers insight into what we can and cannot yet ascertain from human origins research. The information provided by Rana and Dykes is highly relevant and discipline-specific, but I would have like to seen it clearly contextualized within the RTB Creation Model* that has served to provide an overarching, multidisciplinary support for the organization’s old-earth creation position for three decades.

Perhaps the most novel approach to the old evolution debate is offered in a single chapter by Perez. He succinctly identifies common fallacies of logic that are endemic to the evolution debate (with examples exhibited by both creationists and materialists). He calls each fallacy out by name and gives examples: the false dilemma, the argument from ignorance, bald assertions, slippery slope, the a priori fallacy, question begging, the straw man fallacy, equivocation, rhetoric and fallacy of irrelevant conclusions.

To be clear, the authors of this book support an old-earth creation and exercise a high degree of data-based skepticism about why observed microbial evolution and microevolution (i.e., adaptive capacity) do not provide de facto evidence for chemical evolution or macroevolution. As they focus on the both the relevant research and methods of reasoning, they unapologetically call themselves evidentialists. This emphasis on the scientific side of the debate (more so than on the theological side) will make many evangelicals uncomfortable; however, because RTB scholars primarily seek to engage practicing scientists, they tend to begin dialogue with data that can be mutually agreed upon. In Christian circles, this might be termed “becoming the scientist to win the scientist” or putting into practice the concept that “all truth is God’s truth.”

“As we keep Christ at the center and follow the evidence where it leads, we can remain confident that we have nothing to fear from the truth.” (p. 284)

You do not have to agree with these authors to learn from them. Any scientifically literate person who is willing to critically evaluate the latest and most relevant research regarding the topic of evolution will find this book informative and useful in developing a defensible perspective on this much-debated subject.

The culture wars of past decades have resulted in the false impression that science is at odds with Christianity and that it may only be wielded by secular thinkers. As a result, it seems that people of faith have often and unnecessarily avoided vocations within the research community. Nevertheless, this book demonstrates how Christians are well positioned to engage scientific disciplines with both rigor and wonder. We need not fear our Father’s world, no matter who may brandish its data.

Make Your Own Tracks…
Bonus Chapter available at this link:
“Which Evolutionary Hurdles Recognized by Darwin Still Remain?”