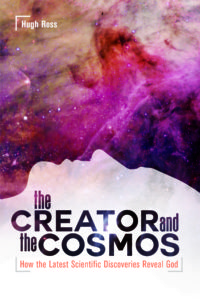 Terrorism. Tragedies. Fake news. Allegations. It’s time to avert your eyes from the anxiety-producing online commentary that drives you to distraction. Turn off your mobile. Sit back and wonder. Look at points of light in a dark, night sky. Was our universe – everything we see and know – inevitable? Is it by chance or by purpose that you consider this question? Reclaim control of your faculties, and contemplate your place in the cosmos.

A seven-year-old, budding astronomer named Hugh Ross looked to the night sky more than six decades ago and asked, “Are stars hot?” A prolonged pursuit for answers set him out on an academic quest, not only into space, but into the past and beyond. Dr. Ross’ newly released 4th edition of The Creator and the Cosmos is an ardent scientific defense of Big Bang cosmology and a call to consider its implications on a personal and spiritual level.

Like me, you may be surprised to learn that the Big Bang Theory requires a defense at this point. After all, it has not only been well vetted by the mainstream physics community, it has passed into the vernacular of popular culture via the title of a popular sit-com. Nevertheless, the most celebrated minds of science still endeavor to know exactly how our universe came to be, and they engage in vigorous debate to that end. After all, the how may imply a why.

The Big Bang is not just a tacit affirmation of “In the beginning…”; it is a theory that leads us to the possibility of a transcendent Creator via the scientific method rather than in spite of it. Its seemingly incontrovertible implications are both profound and unsettling to anyone who believes themselves to be well-ensconced within the fortress of philosophical naturalism. Once 20th-century scientists determined that the universe was inexorably expanding, they could then begin to retrace its early development. Ross reviews a litany of discoveries that permitted scientists to see further and further into the past with increasing clarity. Having retreated so far, they now find their backs up against a single point that defines the boundary of all that is known. Will they now turn and face that which is beyond? The realm that spawned a pluripotent singularity that differentiated into all the space, time, matter, and energy that we experience? A First Cause that set it all in motion?

Dr. Ross very effectively couples physics with Christian evangelism until, under the duress of the data, the intellectually honest skeptic must at least consider that something supernatural is afoot in the universe. This new iteration includes over 70 pages of new content, and the discussion questions at the end of each chapter invite readers to engage in intellectually and theologically rich discussions. Still have doubts at the end of the book? Check out the appendices and online compendium listing hundreds of finely tuned parameters for life. Or, alternatively, just proceed to 30 years’ worth of research compiled by Christian scholars at reasons.org.

Although this book specifically targets challenges to Big Bang cosmology, The Creator and the Cosmos offers abbreviated explanations of other related topics that receive further elaboration in Ross’ other works such as More Than a Theory, Why the Universe Is the Way It Is, Beyond the Cosmos, and Improbable Planet. Dr. Hugh Ross is both the consummate scientist and the consummate evangelist, uniquely qualified to address questions at the intersection of science and faith. If any of the following questions pique your interest, you will want to add these books and others offered through the ministry of Reasons to Believe (RTB) to your reading list:

The book is written from an old-earth creation perspective that does not support macroevolution. It primarily addresses the concerns of skeptical scientists as well as scientifically literate laypeople within the church. Young-earth creationists may want to venture out and examine this book or other RTB reads in order to explore the robust scientific support for the old-earth position as well as its moorings to an inerrant interpretation of Scripture as affirmed by the Chicago Statement on Biblical Inerrancy.

While the SETI Institute still awaits transmissions from intelligent life beyond Earth, the stars have been speaking all along. It is from their language of light that physicists continue to decipher the story of the universe and how it relates to life here on Earth. Tonight, resist the seductive siren call of your cellular device. Look to heavens and be reminded of their enduring and ancient declarations: There is a Creator of the cosmos, and he is the Creator of you.