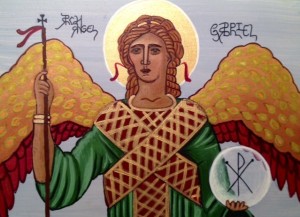 “Greetings, you who are highly favored! The Lord is with you.” Luke 1:28

Such a warm pronouncement, yet Mary was “greatly troubled…and wondered what kind of greeting this might be.” (Luke 1:29)  She had been chosen to bear the long-awaited Messiah — a great honor for certain!  And those moved by the Spirit knew it.  Upon seeing Jesus in the temple courts, Simeon praised God for the appearance of a Light that would let those who would see it find their way out of darkness. He then gave Mary a blessing somewhat curious to our ears, “This child is destined to cause the falling and rising of many in Israel, and to be a sign that will be spoken against, so that the thoughts of many hearts will be revealed.  And a sword will pierce your own soul too.” (Luke 2:35)  Mary was going to experience the bittersweetness of being favored in a fallen world.

So began Mary’s special blessing, but also an onslaught of trials:

But  joys, victories, and wondrous miracles were interspersed among these sorrows.  Bittersweet is an apt term to describe the outpouring of Mary’s favor, for her blessings ran counter to the nature of the fallen world around her.  In fact, both “bitter” and “sweet” are terms used to describe the hard prophetic messages given to the prophets Ezekiel and John.  Being commissioned by the God of the universe to deliver a message is certainly both glorious and sweet, but the delivery of the message to a hostile audience can be, well, bitter.  And Jesus’ life bore out the fullness of this reality.

The transcendent, divine love of God and the woe-filled sinfulness of the present age are beautifully juxtaposed in song:

See from His head, His hands, His feet,
Sorrow and love flow mingled down!
Did e’er such love and sorrow meet?
Or thorns compose so rich a crown?*

Just as Mary knew Christ in his sufferings, however, she also knew him in the glory of his resurrection from the dead.  And, perhaps it was even the bitterness of circumstance that maintained her sweetness.  Much like Paul who found that thorns brought with them humility and a reliance on the grace of God, and his weaknesses showcased the power of Christ.

What bitterness compares to the sweetness of having known and been known, loved and been loved, by the God and Creator of the universe?

*From “When I Survey the Wondrous Cross” by Isaac Watts.