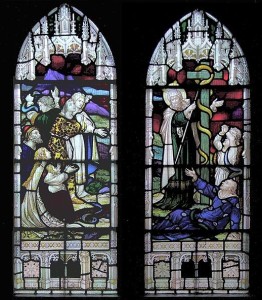 Nehushtan was the Hebrew name given to the bronze serpent held up by Moses to bring healing.
Click the image for a better view.

Flip forward to the Book of Numbers, and we find snakes sneaking up on folks again. This time the entire nation of Israel is in transit, and frankly, in sin. So much sin that it’s about to come back and bite them. Literally. God sends snakes to bite them. It’s wholly unpleasant and the body count is rising. But then there is repentance, and a strange but efficacious cure is made available: look at the bronze snake on the pole and live. (Numbers 21:4-9)

I realize this is a very short snake story. Just a single paragraph in one of the least quoted books of the Bible. But as primitive and obscure as this story might seem, it foreshadows the most profound and fundamental of biblical messages. In fact, this earthly imagery prepares us for the overarching metanarrative of all Holy Scripture, and it reappears just prior to one of the most well known verses of all time:

14 Just as Moses lifted up the snake in the wilderness, so the Son of Man must be lifted up, 15 that everyone who believes may have eternal life in him.

16 For God so loved the world that he gave his one and only Son, that whoever believes in him shall not perish but have eternal life. 17 For God did not send his Son into the world to condemn the world, but to save the world through him.

Thousands of years later, God himself donned the skin of sinful mankind and was raised on a cross, the remedy for the malady of falleness and depravity for those who would see it. The cross was the pivot point upon which the redemption of all the world turned.

Rock of Ages, cleft for me, Let me hide myself in Thee;
Let the water and the blood, From Thy wounded side which flowed,
Be of sin the double cure; Save from wrath and make me pure.”

“Nothing in my hand I bring, Simply to the cross I cling;
Naked, come to Thee for dress; Helpless look to Thee for grace;
Foul, I to the fountain fly; Wash me, Savior, or I die.”*

It now became evident that God had made a preemptive strike even before the foundation of the Earth. Though He had not created evil itself, He had created the potential for the inception of evil which stood before the world’s inhabitants in the form of a clearly visible tree with a clearly comprehensible commandment. For without at least one Law, there would have been no way to externalize what would fester within. And there could be no repentance without awareness of an infraction. (See Romans 5:12-21 for more detail.) Human beings would have then suffered the same eternal consequences of fallen angels with no recourse.

“Not the labor of my hands Can fulfill Thy law’s demands;
Could my zeal no respite know, Could my tears forever flow,
All for sin could not atone; Thou must save, and Thou alone.”*

Though mankind would indeed gain knowledge of both Good and Evil through their lost innocence, they would also potentially qualify for a benefits plan unavailable to fallen angels. A different system would be put in place this time — a system over which the more “angelic” angels would puzzle, yet rejoice. Indeed they would watch in wonder as the Holy One would reveal yet another facet of his character: that He was merciful and willing to suffer much to make his people aware of it. (Romans 11:32) For He who is incompletely comprehensible is likewise not completely incomprehensible. The glassy barrier now reflective, will one day become transparent. (I Corinthians 13:12)

So, don’t hold the whole Garden incident against the snakes in your backyard. God reclaimed and reframed this creature’s reputation by the fourth book of the Bible. At the same time, the Almighty not only crushed the true enemy’s head, but slapped him in the face as well. For ironically, Lucifer’s deceptive plot only served to advance God’s plan to enable men and women to become like Christ (1 John 3:2) — in a way, the very thing he falsely promised them in the beginning. How ’bout them apples?

Make your own tracks…Discuss what it means to be “shrewd as snakes and innocent as doves” as Jesus commanded his disciples in Matthew 10:16.