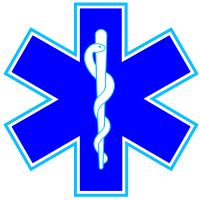 The Star of Life has become the internationally recognized logo of emergency medical personnel. Yet a snake on a rod seems like a strange symbol for healing and life-saving services. How did this sinister creature have its image so remarkably reframed?

Subtle and crafty, the serpent was to become known as Eden’s infamous interloper and Master Botanical SpinDoctor. He could execute a disinformation campaign convincingly enough to sell ice to Eskimos. Or, fruit to those who lived among fruit trees. Or, dissatisfaction to those experiencing the highest quality-of-life index. He ever so carefully sowed seeds of doubt  using false reasoning and half-truths, drawing Adam and Eve into whimsical delusions of grandeur while simultaneously arousing undue suspicion toward their loving Benefactor.

“Why enjoy communion with the God of the universe when you could be just like him all on your own?”

Not only did his message effectively stimulate discontent, but the messenger himself was probably quite convincing. Adam and Eve had been tasked with managing the Garden, which included naming the animals that dwelt alongside them. They probably called various creatures to themselves, just as we call to our household pets of today. But this one…he addressed them. He seemed more “evolved” than the others. He could speak. He could reason. And how could he possibly know about the singular prohibition that God had given them? If this animal had found a way to become human-like, then he might actually know the secret of how humans could become God-like. A credible, yet ultimately flawed, conjecture.

In the short term, however, the beguiled and busted humans were immediately demoted from management to labor positions: manual labor for the man and birthing labor for the woman. And they were cast out of the Garden. As the old saying goes, “Sin takes further than you want to go, keeps you longer than you want to stay, and makes you pay more than you want to pay.” And sadly, sin also has corporate effect. Adam and Eve would not suffer its ill effects alone. The impact of this single act would reverberate throughout the ages and throughout the Creation. What started subtly would not end subtly.

So what was up with this rotten serpent? And why didn’t the Garden Manager (Adam) just smash in his slimy head with a garden hoe right from the beginning?

It all makes more sense if you are familiar with the prequel. This particular serpent was being innervated by a more malevolent being, unlike any ever encountered before by man or beast on Earth. In another time and place, Lucifer had thought himself equal with God. He had gathered a minority contingent of other angelic beings who ultimately failed in their attempts to usurp the power and authority of the Almighty. The consequences were disastrous. They become outcasts from heaven a.k.a fallen angels, a.k.a devils or demons. But Lucifer was as much a victim of faulty thinking patterns as he was a purveyor of them. He conceived that he might still emerge victorious somehow. Maybe a change of venue, maybe a change in species. After all, if you can’t get to Superman, you go after Lois Lane. Right?

Make your own tracks…Check out Genesis Chapters 2-3 to read about the initial interaction of mankind with the serpent. Isaiah 14:12-14, Revelation 12:7-9, and Jude 1:6 provide some good material regarding the prequel story. Stay tuned. Next week, the snake is going to make a comeback.