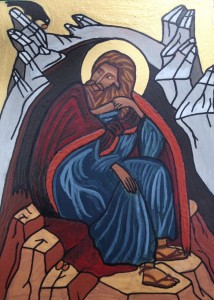 Matthew Henry’s Concise Commentary on the Bible waxes eloquent regarding this biblical scene and provides material far superior to my post. You can click the image to see a far superior icon.

Among Time Magazine’s Top 10 Most Heroic Animals we find a little homing pigeon called Cher Ami. This unlikely conscript saved the lives of nearly 200 American soldiers of the 77th Division’s “Lost Battalion” in France during World War 1. After being shot to the ground, this little bird took flight once again to deliver the critical message that dangled from his bullet-pierced, little leg (that eventually had to be amputated).

Mere pedestrians have long deemed their bipedal experience as merely pedestrian* and coveted the ability to soar. And one can only marvel at the hummingbird’s specialized hovering capabilities. Orville Wright stated that “learning the secret of flight from a bird was a good deal like learning the secret of magic from a magician.” Effortlessly and unknowingly, these tiny creatures employ the laws of physics to incite wonder in the minds of even the most brilliant engineers.

In the Holy Scriptures, we find birds serving in unique capacities due to their much desired gifting. Perhaps they were Cher Ami’s avian ancestors that served as divine couriers to Elijah. The mighty prophet who could invoke fire to fall from heaven (1 King’s 18:37-38) or conversely request that rain cease to fall (James 5:17) with a single prayer from his lips was required to passively sit and await the arrival of his daily bread brought to him by ravens. In Matthew 6:26 we find that birds are exemplary in their reliance upon God for provision, so it appears they were just passing the lesson along.

In “The Art of War,” Chinese military general and philosopher Sun Tzu (~544–496 BC) observed that “birds rising in flight [are] a sign that the enemy is lying in ambush.”  We also find cases of strategic birdwatching in the Bible. Though the historical characters of scripture could not fly, much could be inferred from a “bird’s-eye view.” While adrift on water as far as the human eye could see, Noah deployed a raven and a dove on surveillance and reconnaissance missions to determine if dry land and vegetation had resurfaced. (Genesis 8) Just as birds were used to indicate hope of a new Earth in Noah’s day, they likewise were utilized by Jesus to symbolically describe another time of renewed hope following worldwide calamity as described in Matthew 24:26-30: “Wherever there is a carcass, there the vultures will gather.” (v. 28) In context, this passage simply indicates that one will not need to travel around looking for Christ’s return; His re-entry will be evident to all who simply look up (Luke 21:28). Perhaps he chose this more ominous bird to foreshadow the ultimate renewal of all things because His appearing will transpire in the midst of great turmoil and wrath. I’m open to hearing other possible explanations.

Doves, ravens, and even vultures get biblical press, but it is probably the sparrow that is most frequently referenced in both Christian sermon and song. Why so many “religious retweets”** regarding sparrows? Because of this encouraging contrast found in Luke 12:6-7:

“Are not five sparrows sold for two pennies? And not one of them is forgotten before God. Why even the hairs of your head are all numbered. Fear not; you are of more value than many sparrows.”

As it turns out, we are the creatures to be envied after all.

*Yep. Pun intended.
**Agreed. That one was awful.

Make your own tracks...Research the many references to birds in the Bible. What does God tell us about himself through them?

One thought on “Birds of the Air”