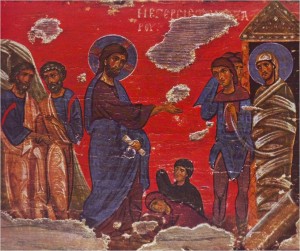 From atop the Leaning Tower of Pisa, Galileo simultaneously dropped a massive canon ball alongside a much smaller musket ball. As they struck the the ground below with a single thud (more or less), a commonly held misconception was shattered. Shockingly, the erudite Aristotle had been erroneous in his assumption that two objects of different weights would drop at different rates. A simple demonstration to the contrary shook loose this faulty notion and plunged thinking minds forward into a new understanding of the natural world.

In the field of science education, such occasions are called “discrepant events.” Simple observations that fly in the face of what we expect, thereby necessitating the development of new explanations to make sense of it all.  Unnoticed weeds that have spread their roots through our minds are suddenly spotted and uprooted from our cognitive landscape — leaving a place for new ideas to grow.

In the New Testament we find that Jesus was often addressed as “Teacher.” And that he was. Scripture records his skillful questioning techniques, powerful illustrations, instructive metaphors and, yes, perfectly timed discrepant events. Perhaps no story better displays Jesus’ pedagogical prowess in the use of this particular technique than the story of Lazarus  in John 11.

In this well known account, Jesus is notified that his beloved friend Lazarus is sick. Nevertheless, he waits for a couple of days before going to visit. When he finally arrives, Lazarus has died and Jesus is met by the grieving sisters, Mary and Martha. Each sister approaches Jesus with the same faulty “if, then” statement: “If you have been here, then our brother would not have died.” Their hypothesis revealed misconceptions that would need to be unlearned before relearning could take place. They knew Jesus had healed others who were complete strangers, so why now did he not rush to the aid of his close friends? Why had he lingered with the Twelve, speaking in puzzling metaphors?

Jesus had tried to prepare his disciples in advance, but this lesson was going to be beyond words. It would need to permeate through them, beyond their minds and into their hearts and souls. And this discrepant event would not only generate cognitive dissonance, but emotional dissonance. The fabric of Mary and Martha’s thoughts and feelings would unravel into a mass of confused and disparate strands in order to be rewoven into a new garment of praise. (Isaiah 61:3) His precious  friends would be devastated, though only temporarily. But Jesus was himself so embedded into their lives that he entered into their grief with them. Alongside them, he wept.

Throughout the Gospels we find that Jesus met people where they they were before taking them where he knew they could be. For instance, the centurion already understood that time and space were not problematic for one with the authority and power to heal. (Matt. 8: 13) In that case, Jesus confirmed the man’s faith and moved on. But not in this case. Jesus didn’t answer questions directly and didn’t act immediately. Rather, he disoriented these folks enough that they started to reframe their questions.

And this Instructor had skillfully used proofs before. At least a few of his skeptics had learned not to challenge him about his ability to forgive sin. (Matt. 9:1-8) Now he extended his claims further and provided a sufficient miracle to back it up. With this event, he would declare that he was the Resurrection and the Life. By bringing Lazarus back to temporal life, he would prepare his friends and followers to understand something of eternal life.

Eventually Christ’s own resurrection would be declared a non-negotiable tenet of the Christian faith as spoken by believers throughout the world in the Apostles Creed:

I believe in God, the Father almighty,
creator of heaven and earth.
I believe in Jesus Christ, his only Son, our Lord,
who was conceived by the Holy Spirit,
born of the Virgin Mary,
suffered under Pontius Pilate,
was crucified, died, and was buried;
he descended to the dead.
On the third day he rose again;
he ascended into heaven,
he is seated at the right hand of the Father,
and he will come to judge the living and the dead.
I believe in the Holy Spirit,
the holy catholic Church,
the communion of saints,
the forgiveness of sins,
the resurrection of the body,
and the life everlasting.
Amen.

When recited, the Creed sounds quite reverent and dignified. But make no mistake. The Father’s kingdom belongs to those of simple, child-like faith. (Matt. 18:1-6) Perhaps the most fundamental creed of every Christ-follower is captured in this most recognizable of songs:

Jesus loves me, this I know
For the Bible tells me so
Little ones to him belong
They are weak but He is strong

Make your own tracks…Carefully examine Jesus’ instructional techniques as he speaks with both a rich, young man (Matt. 19:16-26) and a rich, old man (John 3:1-21) about how to obtain eternal life.