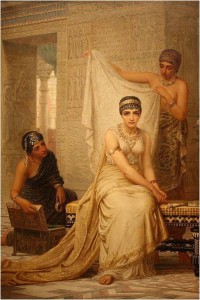 Many Christians around the world are currently observing Lent. I rarely do. Left to my own devices, I tend to feel that life produces enough hardship to make additional self-imposed suffering or discomfort seem unnecessary. Just being honest. But fasting is a spiritual discipline mentioned sporadically throughout Holy Scripture, and it is particularly evident in Esther — the only book of the Bible where God’s presence is made conspicuous by the absence of any direct reference to him. Beyond fasting, the more prominently featured characters carry out some other activities that seem bizarre to those of us who live in a different time, culture, and hemisphere. We read that Queen Esther, Mordecai, and the Jews in Persia do things like tear their clothes, wear burlap-like rags, cover themselves in ashes, and wail aloud. All these acts fervently externalize the grief and terror within as they face the prospect of annihilation. The twists and turns of interwoven plot strands contained in this little book all come together to fashion one of the most fascinating and compelling narratives ever told. A story complete with wild parties, seduction and romance, an assassination  plot, a genocidal maniac, a temperamental king, an orphan turned queen, a short war, the pronouncement of a new holiday celebration (still observed to this day), and some very satisfying poetic justice. Even some divinely ordained insomnia.

But back to fasting…why would anyone do it? In the case of Esther, it appears to be a physical manifestation of weakness and unworthiness in approaching God during a time of dire need. But I think there must be more to it. I found that John Piper offers some noteworthy commentary in his book “A Hunger for God”:

Bread magnifies Christ in two ways: by being eaten with gratitude for his goodness, and by being forfeited out of hunger for God himself…

[Fasting] is an intensifier of spiritual desire. It is a faithful enemy of fatal bondage to innocent things. It is the physical exclamation point at the end of the sentence: “This much, O God, I long for You and for the manifestation of Your glory in the world!”

At the end of Esther’s story we find that God indeed honors the prayers and fasting of the Jewish people. Fasting finally leads to feasting. And Queen Esther has played more than just a royal role. She has intervened on behalf of her people to save them from destruction. As Beth Moore points out in her women’s study on Esther, in a sense, this Jewish queen has also served a priestly role.

The book of Esther begins with Queen Vashti, who does not come before the king when summoned. But then enters Queen Esther, who risks her life by approaching the king though she has not been summoned. In doing so, she reconciles the Jewish people to the king and people of a foreign land. Likewise, we find in 1 Peter 2:9 that we to are to serve as royal priests (and priestesses), interceding and intervening for those around us in efforts to reconcile them to our Bridegroom and King. But unlike Esther, we are ever entreated to approach his throne with confidence. (Hebrews 4:15-16)

Make your own tracks…This week’s music pick is “Dance with the King” on Joy by Beckah Shae. Enjoy!